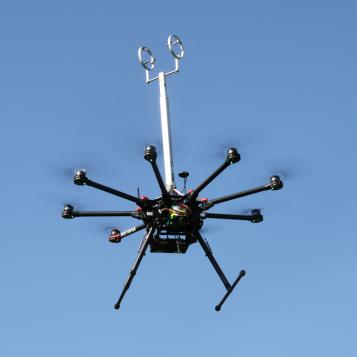 The Federal Aviation Administration (FAA) recently awarded the Aerodynamic Flow Control and Advanced Diagnostics (AFCAD) Research Group $698,921 to study wake turbulence and flutter testing in Unmanned Aircraft Systems (UAS) in collaboration with the University of Kansas. The goal is to assist the FAA in developing policies and procedures that limit negative impacts of wake turbulence and exemplify safe flutter flight testing practices for UAS.

The grant comes out of a $7.5 million investment into university-led research for the safe incorporation of drones into the U.S. airspace. Each of the nineteen universities involved in the grant are part of the FAA’s Air Transportation Center of Excellence (COE) for Unmanned Aircraft Systems – also known as the Alliance for System Safety of Unmanned Aircraft Systems through Research Excellence (ASSURE) – a select coalition of top research organizations and industry partners.

“This grant will fund the continuing development of UAS capabilities at the ARC, and position us at the forefront of UAS flight testing”, said Matt McCrink, research scientist for the AFCAD. It’s estimated that the number of commercial and recreational drones will increase to over 2 million by 2024.

Wake turbulence is the atmospheric disturbance generated by an aircraft and flutter is the unstable vibrations within an aircraft that can lead to structural damage or failure.

The group will work alongside the Technion Israel Institute of Technology to create a unique vehicle to demonstrate safe flutter flight testing. Flutter testing is generally one of the most dangerous aircraft-conducted flight tests, so McCrink and his team hope to contribute to a safer exploration into studying it.

Ohio State joined ASSURE in 2015 and has since made significant contributions to the FAA’s mission to research and develop policy for safe UAS operation.