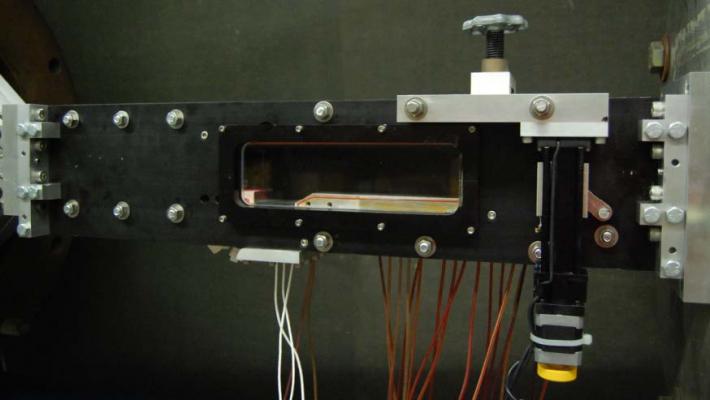 A 2 inch by 2 inch supersonic blowdown wind tunnel serves as a test facility for open cavity flows. Open cavity flows are dominated by recirculation in the cavity and the resultant shear layer, which forms above the cavity opening. As structures in the shear-layer are amplified by the Kelvin-Helmholtz instability, they interact with the aft wall of the cavity. This interaction generates acoustic waves, which travel through the recirculation region and trigger the formation of more structures in the shear layer. This feedback loop can result in resonance, which causes significant narrowband pressure fluctuations. The associated shear-layer entrainment also can generate significant drag. Five Localized Arc Filament Plasma Actuators (LAFPAs) are located along the upstream lip of the cavity. They can excite the Kelvin-Helmholtz instability to either enhance or mitigate resonance, depending on the application requirements.

The cavity facility is modular, to provide a wide range of test conditions. The Mach number, stagnation pressure, test section divergence angle, and downstream blockage area can all be varied independently. The Mach number is set by a Method of Characteristics, smoothly contoured, converging-diverging nozzle upstream of the test section. Modular nozzle blocks can be used to achieve Mach numbers up to Mach 4. The stagnation chamber pressure can be controlled to modify the flow Reynolds number. The test section divergence angle and downstream blockage area can be used to control the axial pressure gradient experienced by the cavity. The cavity aft wall is also modular, allowing a variety of geometries to be examined, in particular a slanted or straight aft wall. The photograph shows the slanted aft wall installed.

The actuation parameters are also flexible. A DC power supply independently controls each actuator and can generate frequencies up to 20 kHz and pulse-widths up to 6 µs. The independent control allows a large number of modes (including those in which not all the actuators are active) to be explored.