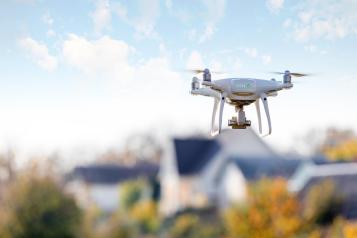 The Ohio State University Aerospace Research Center has been awarded a $371,000 grant from the Federal Aviation Administration (FAA) to investigate detect and avoid systems of uncrewed aerial systems (UAS), also called drones, with an aim to improve overall safety.

“It’s great that Ohio State is providing leadership in an area that will be the key enabling technology for detect and avoid,” said Research Assistant Professor Matt McCrink, principal investigator at Ohio State.

The project will be conducted in partnership with lead institution Embry-Riddle Aeronautical University, along with collaborators Mississippi State University, University of North Dakota and Ohio-based CAL Analytics.

Results of the study will be used to determine the requirements for on-board sensors that will support the implementation of detect and avoid technology on UAS.

McCrink explained further. “Air traffic control radar monitors the skies at 2000 feet and above. However, UAS fly much lower and need to be able to quickly detect – then avoid – many obstacles autonomously.” This project will focus on the technology needed to implement those systems.

In addition to McCrink, Ohio State research staff and graduate students expert in UAS will support the study.

The investigation builds on Ohio State’s expertise in UAS, including development of UAS to monitor traffic and roadway conditions from the air along Ohio’s U.S. Route 33 Smart Mobility Corridor.

From Ohio State to Mars