Wildfires are gruelingly difficult to fight, and their behavior and spread are notoriously hard to predict. Fires can travel up to six miles per hour in forests and up to 14 miles an hour in dry grass. If terrain slopes upwards, those speeds can double. 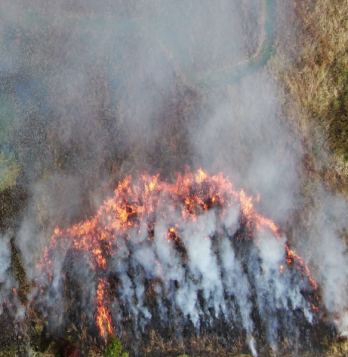 Experts predict that climate change effects will intensify wildfires and increase their frequency in areas not typically known for wildfires. Future fire probability forecasting shows dramatic increases in probability of catastrophic fire in parts of the Eastern United States due to climate change, combined with rapidly increasing wildland-urban interface areas. More attention is needed to understand the factors of fire behavior and spread in Eastern forests.

Natural resource agencies and wildland firefighters will need every available tool at their disposal to conduct prescribed burns and respond to emergencies, including UAS, otherwise known as drones. Real-time situational awareness of fire conditions and movement can help firefighters improve containment strategies.

The “Integration of Autonomous UAS in Wildland Fire Management” project team will address the multitude of challenges when using drones to monitor spread and intensity of wildland fires. They also will explore how topographic, atmospheric and forest fuel factors in temperate hardwood forests influence fire intensity and rate of spread through real-time data activation in fire behavior models.

In the long term, this work will aid in the management of the wildland-urban interface and monitoring and suppression of unplanned wildfires. An ultimate goal is taking humans out of wildfire missions that involve dangerous and repetitive actions.

“While the bulk of research in technology use during wildfires has focused on fires in the west, we are focused on the eastern U.S. to hopefully get ahead of the increasing intensity that is predicted over the next several years,” explained Kumar, who directs the Laboratory for Autonomy in Data-Driven and Complex Systems.

He added that wildland fires are an ideal setting to develop autonomous risk-aware decision making in unstructured and uncertain hazardous environments.

“This is not just flying in isolation,” said Syracuse Professor Amit Sanyal. “There is hot air from fires and different air currents being induced. Sensors also have to deal with smoke, ash, burning leaves or leaves about to catch fire.”

Kumar’s team will shadow the Ohio Department of Natural Resources’ prescribed burn team into the southern state forests of Ohio, led by Greg Guess at the Division of Forestry. Prescribed burns are typically conducted late in the fall or early spring, when the fuel and weather conditions are conducive to a controlled burn. The unmanned aerial systems will undergo rigorous testing and validation, leading up to fully autonomous mission design and deployment in these prescribed burns and eventually wildfires.

This material is based upon work supported by the National Science Foundation under Grant No. 2132798.

by College of Engineering communications staff

From researcher to faculty member and fundamental to flight test