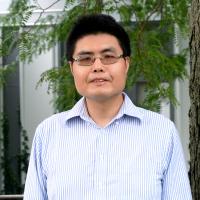 The American Institute of Aeronautics and Astronautics (AIAA) has released the names of those receiving election to its ranks in 2022. Among those from The Ohio State University is Lian Duan, associate professor and Honda chair in transportation in the Department of Mechanical and Aerospace Engineering.

The prestigious election is awarded to those who have made notable and valuable contributions to the arts, sciences or technology of aeronautics or astronautics, according to the AIAA website. Duan will be formally inducted and presented a plaque as part of the annual AIAA SciTech Forum held January 3-7, 2022 in San Diego, California.

“It’s a great honor to be recognized as an Associate Fellow of AIAA, and I feel proud and humbled when I look at the list of colleagues who I join as a member of the Class of 2022 Associate Fellows,” Duan said. “I cannot stress enough that over the years I had the enormous fortune of working with extraordinary colleagues and students. I see this as a recognition of their work as well.”

He was a research scientist at the National Institute of Aerospace/NASA Langley Research Center from 2010 to 2013 until he moved into an assistant professor position at the Missouri University of Science and Technology in 2013.

In 2019, Duan became an associate professor in the Department of Mechanical and Aerospace Engineering and Honda Chair in Transportation at the College of Engineering at Ohio State. Duan is the director of the Computational Aerodynamics and Flow Physics Lab (CAFPLab).

Also joining the ranks as an AIAA Associate Fellow from Ohio State is John M. Horack, senior associate dean of engineering and professor and Neil Armstrong Chair in Aerospace Policy in a dual appointment at the College of Engineering and John Glenn College of Public Affairs.

by Department of Mechanical and Aerospace Engineering