The Aerospace Research Center continues its trajectory to lead critical investigations into issues central to current and future air transportation. Its newest grants – totaling $614,741 from the Federal Aviation Administration – aim to propel the technology and logistics behind unmanned flight.

The funding is part of the agency’s recently announced $5.8 million granted to universities in its Alliance for System Safety of UAS (Unmanned Aircraft Systems) through Research Excellence, known as ASSURE. A six-year member, The Ohio State University is one of 24 research institutions that comprise the ASSURE program. Recent research from ASSURE-based grants at Ohio State have ranged from airplane sensors to injury assessment.

In the latest round of ASSURE grants, the center’s teams received funding in the areas of high-bypass UAS engine ingestion test, air carrier operations and UAS cargo operations.

The Nonlinear Dynamics and Vibration Lab (NDVL), directed by Associate Professor Kiran D’Souza, was selected to represent Ohio State as the lead university to conduct research in the area of high-bypass UAS engine ingestion. The objective is to better understand what an ingestion of a UAS by a high-bypass engine would look like.

The lab is leading an effort to develop a fan model that can recreate the structural and vibratory features of a modern high-bypass ratio fan. By coordinating with research partners, D’Souza’s team is conducting high-speed impacts of UAS and UAS components against an angled titanium plate to validate an existing UAS quadcopter model. The researchers will then do a series of ingestion studies with the validated UAS model and high-bypass ratio fan model.

“The work will seek to define best practices for these ingestion studies and will provide an open source fan model for use in further studies,” said D’Souza.

D’Souza is working on this project with Professor Jim Gregory, chair of the Department of Mechanical and Aerospace Engineering. Additionally, the Ohio State-led team consists of the Wichita State University – National Institute for Aviation Research and the University of Alabama at Huntsville. D’Souza is also working with major engine manufacturers to develop the fan model.

While the work being done builds on an earlier project done with the FAA, D’Souza said research in this area is still very new.

“Very little has been done with any experimentally validated UAS models at the conditions of an engine ingestion, moreover details on the fan models previously used is limited and how well they represent actual in-service engines is unknown,” said D’Souza.

Ideally, D’Souza said the outcome of the research would be three-fold: support development of mitigation strategies, including procedures and training; pave the way to a better understanding of the critical design features of UAS and influence industry design procedures; and provide an open source fan model for future studies.

Along with all of these outcomes, the research will help the aerospace industry plan for safety, by determining worst case scenarios as they begin to analyze proprietary models.

The Aerodynamic Flow Control and Advanced Diagnostics Research Group, directed by Professor Jim Gregory, is leading Ohio State’s portion of the multi-university investigation into air carrier operations, as well as its work in the UAS cargo operations research. Both projects aim to enhance the current state of knowledge in their fields. 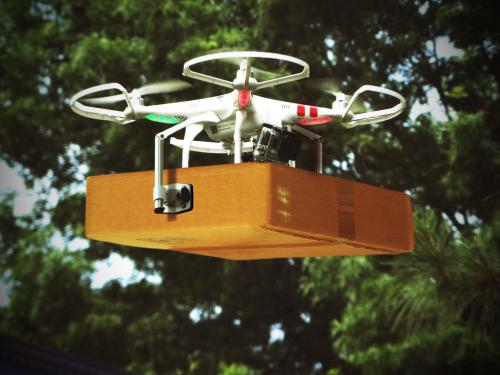 “The idea is very much like the Jetsons,” said Research Scientist Matt McCrink, who’s also co-principal investigator on the project. “You call up your personal air taxi and it comes and picks you up, and takes you from A to B.”

Although it may sound like science fiction, major airframe suppliers have started developing concept vehicles and even begun flight tests. McCrink said there are important questions that arise from the introduction of autonomous air taxis, the main being safety.

“How do we incorporate and encapsulate this new technology, and ensure the safety for both the occupants of the vehicle, as well as deconflicting the airspace such that these things aren’t running into each other?” said McCrink. “That’s the idea.”

Another expanding field in UAS is package delivery via drones.

The group’s grant in the area of UAS cargo operations is focused on inserting autonomy into the package-delivery industry.

Ohio State is no stranger to autonomous flight research. Since 2018 researchers have partnered with the Ohio Department of Transportation to integrate drones to monitor traffic and drones along the 33 Smart Mobility Corridor.

According to McCrink, these two programs have the potential to set the stage for the intersection of autonomy and aviation. “This really is sort of laying the groundwork for the next step, where the public will be able to utilize autonomous transportation,” he said.

The variety of work being done at Ohio State is an example of the ASSURE program being used to its potential. The information provided by Ohio State and other institutions as a result of these grants will help the FAA to understand new UAS technologies and further expand the development work necessary to enable their safe operation in the airspace.

“Our partnership with the FAA allows us to use the deep bench of Ohio State expertise in a wide range of disciplines to impact the future of autonomous air vehicles operating in the national airspace system,” said McCrink.