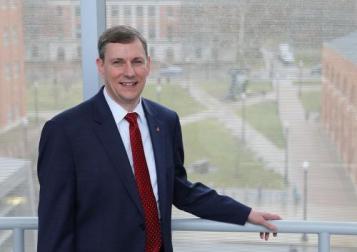 Professor Jim Gregory, chair of the Department of Mechanical and Aerospace Engineering, has been awarded the 2020 Frank G. Brewer Trophy by the National Aeronautic Association (NAA). The award has been presented since 1943 to honor significant contributions of enduring value to aerospace education in the United States.

Gregory was selected as the recipient of the Brewer Trophy in recognition of “his enduring contributions and leadership in engaging the public and students in the science of flight through video series, innovative laboratory experiences, and world-record-setting testing of unmanned aerial vehicles,” according to NAA.

“The Brewer Trophy has, for decades, recognized and encouraged the best ideas that use aviation to educate future generations,” NAA President, Greg Principato, stated. “Professor Gregory is certainly a great college professor, but has gone well beyond those duties to broaden the net and get young people involved in design challenges, record attempts, and so many other innovative ways to use aviation to educate and learn. He is a most worthy successor to the many great individuals and organizations to have received the award.”

Professor Gregory was director of Ohio State’s Aerospace Research Center (ARC) from November 2017 to May 2020. Over his two-and-a-half-year term as ARC director, Gregory led a growth in research expenditures from $2.8M to $8M. In June 2020, Gregory was selected as chair of the department of mechanical and aerospace engineering. Since 2008, funding for Gregory’s research has totaled over $18M from government and industry partners.

Along with his leadership, Gregory is known for his dedication to students. He has continually worked to meet the needs of individual students by offering a “flipped-classroom experience.” This approach lets students access instructional content outside of the classroom, reserving in-class time for students to question, apply and assess the content, providing a tailored learning experience for individual students.

Gregory’s initiatives also focus on experiential learning. He has supported student activities such as high-altitude balloon launches, analysis of flight recorder data, and design/build/fly competitions. In 2017, Gregory led a team of Ohio State students and researchers to set a world speed record for an unmanned aerial vehicle (UAV). The Ohio State UAV held an average speed of 147 mph over a 28-mile course, simultaneously setting a record for longest UAV flight over an out-and-back course.

“I’m deeply grateful and humbled to be selected for the NAA’s Brewer Trophy,” said Gregory. “It’s especially gratifying to recognize that prior winners of the Brewer Trophy – including the NASA Spacelink Team (2000) and Professor John Anderson (2017) – were a tremendous inspiration in my own aerospace education. It’s an honor to ‘pay it forward’ for the next generation in aerospace and aviation.”

by Department of Mechanical and Aerospace Engineering communications