The transonic low pressure turbine (LPT) linear cascade facility has been recently commissioned at the ARC to allow detailed measurements of fluid dynamics phenomena in a high-speed turbine passage. The transonic wind tunnel operates in blow-down mode using high pressure air supplied from large high pressure reservoirs (21 m 3 at 16 MPa) and exhausts to ambient. It can run for up to one and a half minutes at the highest flow rate. The test section is completely transparent for maximum optical access. Several flow visualization techniques, including PIV, Schlieren, and PSP have already been demonstrated. Removable endwall plates allow for different cascade configurations with little modification to the tunnel. Air flows into a 6 1/8” x 20” calming chamber section where it is conditioned for low turbulence and minimal distortion by honeycomb and four screens. The flow is accelerated into the test section by a 4:1 contraction. Turbulence grids can be added to produce elevated inlet turbulent levels. Flow velocity uniformity is within 1.5% at a Reynolds Number of 300,000. Stagnation pressure and temperature of the conditioned flow are measured upstream of the contraction using a Kiel probe and a T-type thermocouple. Inlet and exit velocities are monitored upstream and downstream of the test section by wall static pressure taps. A traverse placed downstream of the test section and moving parallel to the cascade exit plane allows for wake surveys to be taken. A row of choke bars is located in the test section exit duct. These are used to set the area ratio based on the number and diameter of bars, and thus set the Mach number during choked flow. The inlet Mach number can be varied from 0.11 to 0.44. The Reynolds number is set by altering stagnation pressure. The range of possible Reynolds number is broadened by running an ejector sealed at the tunnel exhaust with two stages of axisymmetric nozzles. 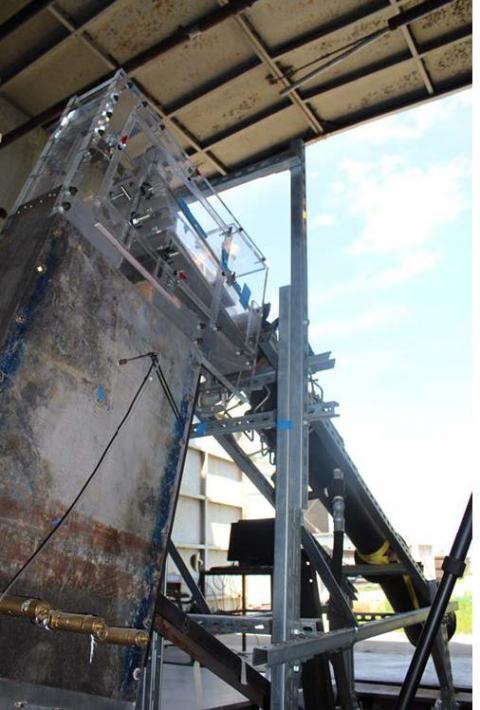 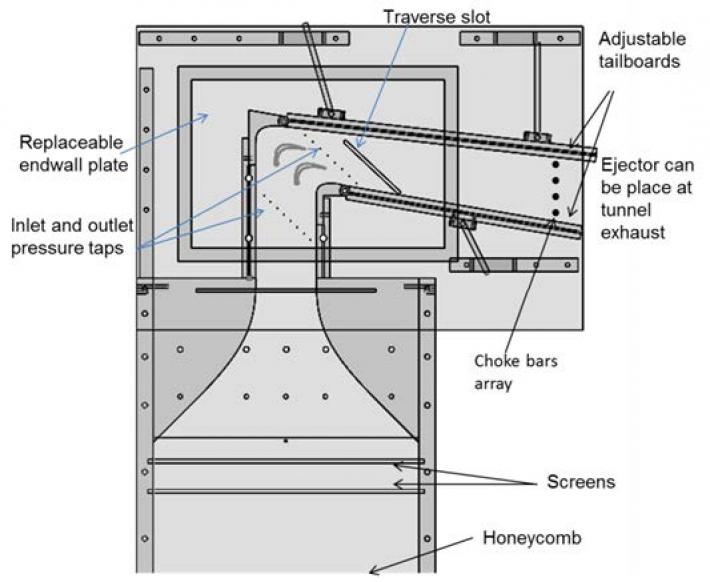 By lowering the exhaust pressure, the ejector allows decreasing the Reynolds number while maintaining choked conditions. The facility has recently been utilized to study the use of flow control by means of vortex generating jets on a highly loaded low pressure turbine blade. This study has examined the effects of compressibility and the losses associated with the presence of shock waves and shock-induced separation. Also examined was the effect of surface roughness on the flow field and control performance. Measurements of Cp and Mach distribution along the blade profile are made via static pressure taps on the blades. A Kiel probe traverse at the exit of the blade passage is used to study the total pressure loss in the wake. Shadowgraph is utilized to observe the shock in the cascade center passage by means of a parallel light source and a high speed CMOS camera. Pressure sensitive paint (PSP) is applied to a blade in order to visualize the three-dimensional flow effects brought on by the vortex generating jets.