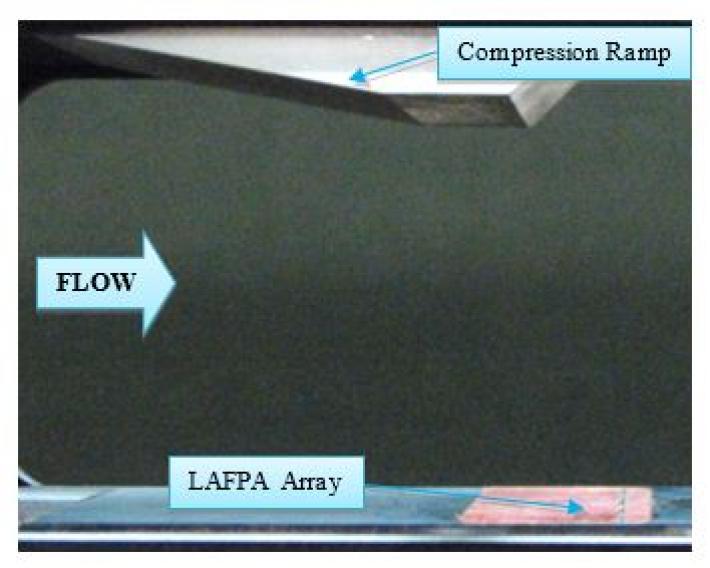 A 3 inch by 3 inch supersonic blowdown wind tunnel serves as a test facility for flows involving shock wave / boundary layer interactions (SWBLIs). A shock generator (compression ramp) turns the supersonic flow, generating a shock wave that impinges on the turbulent boundary layer developed on the floor of the tunnel. The boundary layer thickens and flow separation, for strong shock waves, occurs as a result of the adverse pressure gradient generated by the shock. A row of eight localized arc filament plasma actuators (LAFPAs) placed spanwise along the tunnel floor is used to excite natural flow instabilities associated with SWBLIs to control the interaction process.

The tunnel setup and operation are modular: the Mach number, stagnation pressure, and actuation location can all be varied. Flow Mach number is determined by nozzles designed using the Method of Characteristics. Modular nozzle blocks allow a variable Mach number up to M = 5. In addition, the pressure in the stagnation chamber can be specified to change the Reynolds number. The compression ramp streamwise location can also be set to one of 3 streamwise positions (in 5 mm increments), and a new ramp can be installed to change the angle. The currently installed ramp turns the flow by 10°.

Actuation parameters are also highly configurable, due to the robust high-voltage power supply. Frequencies ranging from 0 to 200 kHz are accessible, as well as duty cycles from 0 to 50%. Each of the eight actuators, oriented in a spanwise array, can be operated independently. This results in a multitude of forcing modes.

Schlieren imaging, surface oil flow visualization, and particle image velocimetry are the available investigative techniques. Schlieren imaging allows for careful inspection of shock waves and flow quality. Surface oil flow visualization on the shock impingement surface is used to qualify three-dimensionality of the flow; it is also used to determine the size and shape of the separation region. Particle image velocimetry is the primary investigative tool and can be performed in either a spanwise or a streamwise plane. The resulting velocity maps are used to quantitatively characterize the flow and the effect of the actuation on the flow.